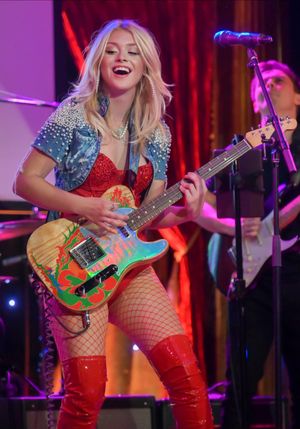 Ashley Suppa is an 18-year-old singer/songwriter from the suburban New York City area.  From an early age, Ashley was exposed to music by her father, an accomplished guitarist who played nationally with a variety of notable musicians. Ashley's first musical experience was at the age of 6, when she was asked to sing background vocals on renowned guitarist Ace Frehley's (KISS) album “Anomaly”. At age 12, Ashley started studying guitar as her main instrument after enrolling in a local School of Rock program. She studied bass and vocal technique, gaining essential experience adapting to the nature of live performance. She consequently joined a local youth theater group, refining her performance skills in a multitude of stage productions.   When Ashley was 15, she started writing and recording her own songs on her first laptop. One demo eventually made its way to a Grammy®-Nominated Producer Alex Salzman, who immediately recognized Ashley's talents for singing, songwriting and production, consequently agreeing to collaborate with her on her debut release.   Ashley credits artists like David Bowie, Lady Gaga, The 1975, Tyler the Creator, Dua Lipa, and Bruno Mars as major influences in her songwriting. She aspires to write songs that reflect the complexity of personal experiences, feelings and perspectives, and hopes that her songs empower people of all ages to think deeper about their relationships and interactions with the world around us.